Welcome to the Secret Santa Blog Hop! I'm glad you stopped by here on my blog. I'm a debut author, that actually just came out with a Christmas romance a month ago! And...it has the phrase Secret Santa in the title. lol.

Anyway, enough of my giddy-ness.

I took a twist on the old secret santa type thing when writing my book. I originally had an idea of a secret santa match where the couple falls in love.  But as the idea came out more and more,  I came up with the premise of my book.

The hero, Jacob Winston, is a little jaded this Christmas, but with good reason.  He's playing a Santa at the mall, where people cam come up and make a wish when they throw a coin in the well. Kind of like collecting money for donating?  One little boy makes a grown up wish and Jacob can't get him out of his mind. When he meets the boy's mother the next day and finds out more about Ben, Jacob just has to do something for this kind little boy.

Christmas is the season of giving, and I think in the midst of all the commercialized way Christmas is viewed nowaways, I made my book have more of a true meaning of Christmas feel. About giving back, finding love, and bringing cheer to others.  My book isn't inspirational in the sense of the genre, but it has been dubbed as an inspiring book by readers.

What is something that inspired you do do something for someone else?


Thanks for stopping at the blog. As my prize I will give away a print copy of The Secret Santa Wishing Well to one commenter. US only. So if you're not from the US and you get chosen, I will instead gift you a copy of the book in either Kindle or nook format. 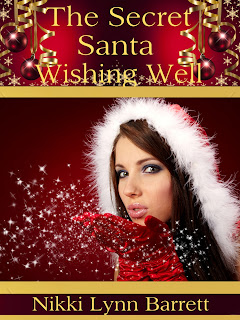 BLURB: The magic of Christmas has been lost to Jacob Winston. At the suggestion of his ill sister, Jacob takes a job as a Secret Santa at the mall, hoping to restore his Christmas spirit. Even that doesn't seem to work, until a special little boy ambles up to make a very special wish...
Cheyenne Jensen is struggling to raise her two kids without the help of her ex-husband who refuses to acknowledge his daughter's existence and doesn't provide for the son he does. This Christmas is shaping up to be as heartbreaking as the last, until her son Ben's kind actions lead a stranger to them.
Ah, but it's Christmas time and the magic has begun.
When Jacob and Cheyenne meet, neither can deny their immediate attraction to one another. As situations arise that require they spend more time together, their feelings grow stronger and stronger.
With Christmas fast approaching, the pair learn what matters most in life. Now, if only they could ditch the ghost of Christmases past.
Maybe this holiday will bring some wishes come true- for everyone after all.


EXCERPT: It didn’t take long for her to come back. Jacob moved to the living room, standing and waiting. When he saw her coming, he closed the gap between them. Before he could think twice, he touched her shoulder gently, wanting to thank her for the evening.

But instead of talking, he leaned in and kissed her. Just a light kiss. Gentle. Friendly.

Until she responded. She had her arms around him, pulling him for another kiss. Deeper. Sweeter. She tasted so sweet. Her need made him swell. He could do this all night. Jacob pressed her against the wall, their kisses deepening with urgency. He ran his fingers through her fine hair. Hers wrapped around. his neck, rubbing lightly.

Jacob pulled back abruptly. “Cheyenne,” he ground out. “We have to stop.” Before I lose it. He didn’t want to stop. He never expected her to reciprocate like this. Wow. Maybe it wasn’t one sided after all. Jacob sighed.

That halted everything. She pulled away, looking at him with wide, beautiful eyes. “I’m sorry. I pushed. You must think I’m a fool. I thought, when you kissed me…” Cheyenne attempted to move out of Jacob’s embrace. Oh, damn. She thought he didn’t want her. He did, oh, how he did.

“No, no. Honey, that’s not it at all. Kissing you was magical. Amazing. But we just met. I don’t want to take things too far. But I would love to see you again.” He pushed back loose strands of her hair that hung over her face when she’d moved. She looked so vulnerable. Was she going to cry? Oh hell, he wouldn’t be able to handle it if she did. The last thing he wanted was for her to be upset with him.

“I’d like that, too. It was a wonderful, amazing day, and I have you to thank for it.” She nearly whispered the words, choking up on the last part. “God, I’m a mess. I’m sorry. There’s been so much going on, and my signals are going crazy at the moment.”

Yours aren’t the only one, Jacob thought. He pulled his cell phone from his pocket, typing in her name in the contacts and handing it to her. “Can I have your number?”

She laughed. “Of course.” Her fingers brushed his as she took the phone from him, tapping in her number. She handed it back to him. Electric shocks of awareness zipped through him. His gaze lingered on her, knowing he needed to get the hell out of here before he lost it completely.

Here is the link to check out the other stops on the Blog hop!